9 things you must know about sherpa

DO you need a Porter Too ? 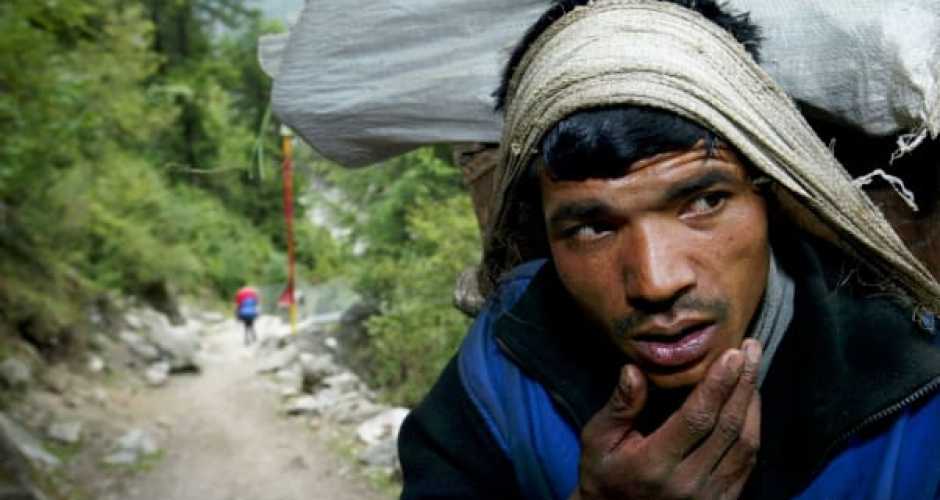 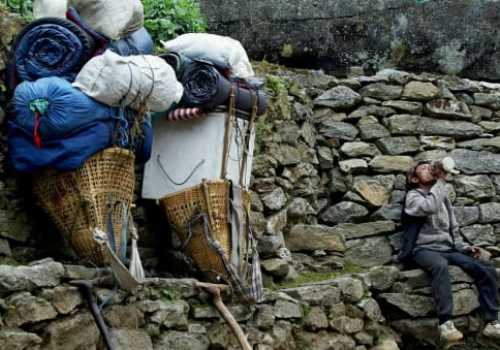 2. IS EVERYONE A PORTER ?
Take a load off: porters are often paid by the kilo.
The word "Sherpa" has also become a job description on a formal trekking crew, but it is not necessarily filled by ethnic Sherpas. The Sherpa job is to set up camp, manage the porters, ensure that loads are evenly distributed and be responsible for the trekking group's safety. Sherpas also need to liaise with the clients, support them along the track and then run ahead to make sure the tea is on the boil when clients arrive at camp.
Often thought of as self-sacrificing, tenacious best friends of the foreign mountaineer, successful Sherpa will be all too happy to boast that they are doing well enough to employ non-Sherpa ethnicities to schlep loads for them and their clients.
But only to a base camp. The Sherpas who continue on to higher camps and to the summit are highly specialized and usually of Sherpa ethnicity. The higher altitude jobs are more dangerous, requiring more experienced Sherpas and earning higher pay. The average elite Sherpa can make $4,000-$5,000 in two months.
MORE: Scientists discover why Sherpas are superhuman climbers

3. CAN I BE LIKE A SHERPA ?
Scientific tests suggest Sherpas are genetically adapted to high altitudes. An American study in 1976 concluded that Sherpas had undergone genetic adaptations after living in one of the world's highest regions for thousand of years. This gave them an advantage when in high altitudes with low oxygen. Adaptations include unique hemoglobin-binding enzymes, doubled nitric oxide production, hearts that can utilize glucose and lungs with an increased efficiency in low oxygen conditions. Since then, more studies have been carried out on the genetic basis for this adaptation.
Following this logic, we could hypothesize that if we and our children and our children's children all lived at high altitudes all our lives, somewhere down the line our descendants would become Sherpas. Unless, you're built like Reinhold Messner who made the first solo ascent of Mount Everest without supplemental oxygen and who also climbed all 14 "eight-thousanders" -- peaks more than 8,000 meters above sea level. Talk about over-achieving. (Paula Bronstein Photo)
Few people mention Sherpas falling to their death in crevasses or being left to die on a mountain whilst in the service of vainglorious clients. One third of the 225 people who have died while trying to conquer Mount Everest were Sherpas. There are grim stories from the early days of climbing about Sherpas who were left on the mountain to fend for themselves. Most famously, the desertion by the Nazi climbing team on Nangba Parbart in 1939 when a storm hit and the Sherpas themselves became baggage the team wasn't prepared to carry. The story was recounted in "Tigers of the Snow" by Jonathan Neale. Sherpas are also not a guarantee against your own death. They may do the risky part of the climb by running ahead to set up the ropes and ladders and they have become increasingly responsible for the safety of clients who have paid for their professional services. But some clients, struck by summit fever and knowing that they may only have one shot at the top, start to take risks and push safety limits. This is an expensive sport and acclimatization can take months. A high proportion of Everest climbers die on the mountain, which does not bode well for the track record of career Sherpas.

5. ARE THERE FAMOUS SHERPA ?

Arguably the world's most famous Sherpa Tenzing Norgay stands with Sir Edmund Hillary in 1953.
Sherpa crews, originally a footnote in the annals of European mountaineering expeditions, are now surpassing almost every nationality in summit records on every mountain in the Himalayas. Tenzing Norgay Sherpa's joint summit with Sir Edmund Hillary in 1953 is still the high point of Sherpa pride -- also Tibetan and Indian pride, as those countries try to claim him as their own. Whilst the late Norgay is Sherpa climbing royalty, rock star status goes to Apa Sherpa who in May 2011 claimed his 23rd summit, the biggest record. The nearest non-Sherpa record to approach this belongs to David Hahn who achieved his 14th summit of Mount Everest on May 26, 2012.

6. WHY DO SHERPA STICKS AROUND EVEREST ? 9. WHY IS EVERYONE CALLED PSANG, LAKPA, or PEMBA ? (str/afp/getty images)
Many Sherpas are named after the day of the week. Deepak Thamal wrote in Himal magazine that one of the reasons fame might elude Sherpas is the difficulty in differentiating between individual Sherpa's names. "When a Sherpa is not a Dorje Lhakpa, he is a Lhakpa Dorje. Moreover, the Sherpa custom of naming children after the days of the week leads to too many Pasang Sherpas, Pemba Sherpas, and Phurba Sherpas," wrote Thamal. Pasang is Friday, Pemba is Saturday. This custom places the child under the protection of that day's deity. Many Sherpa children also receive a virtue name such as Lhamo which means "beautiful," or Gyaltshen which means "courageous speech." On top of this there are a bunch of commonly used names such as Tenzing (meaning steadiness and support) from the scriptures of Tibetan Buddhism. (paula bronstein/afp/getty images)
For Sherpas the highest mountain peaks are the homes of the gods and should be revered from afar -- not conquered. The obsession with summiting was originally European thing. Even for those Sherpas who do climb and assist expeditions up the mountains, many of them believe accidents occur when due respect is not paid to the gods. Puja, a prayer ceremony with offerings to the gods, must precede a climbing expedition. Jon Krakauer described the anxious foreboding of the Sherpas at the lack of respect during the party-like puja ceremony that preceded the disastrous 1996 Mount Everest expedition. It ended in the death of eight people, including revered and highly experienced climbers. Mount Everest: the views are stunning, but you need to have eaten well to traverse these paths.
You have to eat pretty well to climb those mountain paths, right?
Dal Bhaat is what fuels many Sherpas - this dish is a staple in Nepal: a heap of white rice alongside curried veg and lentil juice. Sherpas have to stay fueled when they are traversing the mountain so frequently.
A carb-based diet is also important to ensure muscle isn't lost and the Sherpas stay on their toes.

( Article from CNN Travel - by Bruce Foreman. Thank you so much).